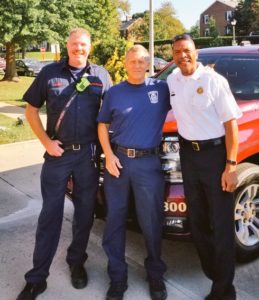 On September 6th, 2018, FF/Paramedic Phil Laub, “The Rock,” completed 34 years of service! Phil always took care of people whether they were patients, tenured firefighters or brand new rookies. He didn’t complain, he’d just do what he felt needed to be done, often going above and beyond what was required. He’d pull you aside to give you advice, and antagonize anyone who took themselves too seriously with his unmistakable chuckle. Physically, he’s always been a beast, shaming plenty of members half his age with his strength and stamina. He was the quintessential “Old School” guy always simplifying the situation and bring you back to the basics. Until a couple years ago, he’d routinely pull his “Blackberry” (a folded up paper with his hand drawn calendar) out of his pocket to check his schedule and jot down appointments.  “The Rock” has been a friend and mentor to many in the department and will be sorely missed. Congratulations and enjoy your retirement! 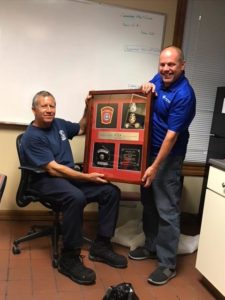 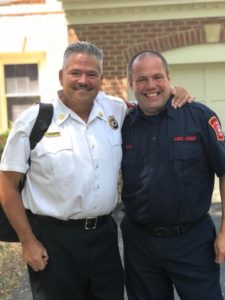 Fire Chief James Bonzano worked his last day on Friday August 24th. Chief Bonzano closed out a 34 year career serving the county where he was born.

He joined the Arlington County Fire Department (ACFD) in 1984, and has worked in numerous positions in his three decades with the department, eventually being name Fire Chief in May of 2016. He served and led in nearly every section of the department. Bonzano served as Acting Assistant Chief, South Deputy Chief, Personnel Services Section Chief, and Emergency Medical Services (EMS) Battalion Chief. Following the terrorist attack on the Pentagon on Sept. 11, 2001, he served as the EMS branch director for the emergency response.

ACFD units were dispatched at 6:37 a.m. this morning to 820 N. Pollard St. for an activated fire alarm. Engine 102 arrived on scene with smoke showing and a sprinkler activation on the 6th floor. Engine 102 requested an upgraded response for a high rise structure fire. When crews got to the apartment, the fire had been controlled by the sprinkler system. They finished extinguishing the fire and ensured there was no extension. Smoke was then removed from the structure. The apartment resident was transported to the Emergency Room for evaluation for smoke inhalation. No other civilian or firefighter injuries were reported. Residents were allowed to reoccupy the building around 7:30. The response was 15 units including an Engine from Fairfax County. The Fire Marshal determined the cause to be improperly discarded smoking materials. An estimated cost of damages is still being determined.

The Arlington County Fire Department reminds residents to fully extinguish smoking materials and discard them in an appropriate container void of any combustible materials. In this instance, the sprinkler system may have prevented this from becoming much more serious outcome.