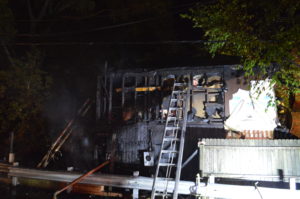 July 2, 2019 – At 2:20 am units from Arlington County, Alexandria and Metro Washington Airports Authority were dispatched for a structure fire in the 2300 block of South Hayes Street. Upon arrival, units found a semi-detached garage heavily involved in fire and one injured occupant in the front yard. Crews provided Advanced Life Support to the injured occupant who was transported to a burn center in serious condition. Two occupants of the main home on the property also met crews out front, were checked by medics, but were uninjured.

Units were able to contain the fire to the garage with minimal damage to the nearby house. Units remained on the scene extinguishing hot spots as the structure became unsafe to occupy. Once the fire had been extinguished, all units reported to rehab prior to picking up. One firefighter was transported in good condition for dehydration, and was later released from the hospital.

Once air monitoring was completed and an all clear was given, the Fire Marshals started their investigation. The 2 occupants who were safely evacuated from the home were assisted by the Red Cross due to utilities being cut off to the property for safety during the fire.

While the fire appears to be accidental having originated in the ground floor level of the structure, the exact cause is still under investigation. The Fire Marshal estimated damages at just over $150,000. 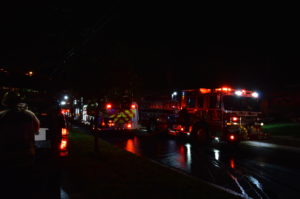 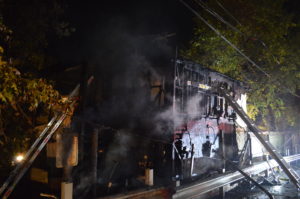