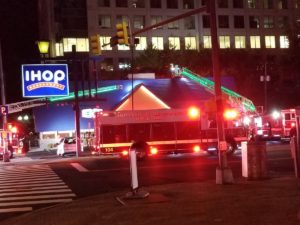 October 3, 2018 at 1:54 am, units were dispatched for smoke and fire coming from a restaurant in the 900 block of North Stafford Street. Engine 102 arrived on scene with smoke in the store and coming from the roof. Units were able to quickly locate the fire and extinguish it. No firefighter or civilian injuries were reported. Fire is still under investigation. Damages are estimated at $100,000.