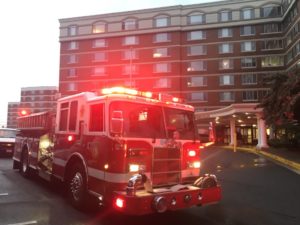 On September 7th, 2018 at 6:20pm, units from Fairfax County Fire & Rescue, Fort Myer and Arlington County Fire Department were dispatched to 1200 S Courthouse Rd. for a reported structure fire. Upon arrival units found an 8 story mid-rise apartment building with no evidence of smoke or fire showing. There were reports of an oven fire on the fourth floor and that the affected apartment had been evacuated.  Companies quickly extinguished the fire which had extended to the cabinets. There was no extension to the remainder of the apartment or any adjoining units. Ventilation activities assisted with the smoke removal on the 4th floor. Air monitoring was completed and all occupants except for occupants of apt 419 were allowed to reoccupy their apartments. All units reported to rehab prior to picking up and returning to service. There were no injuries reported, but the affected apartment resident was displaced.

Fire Marshal’s remained on the scene to conduct investigation and determined the cause to be excessive temperatures within the oven while cooking that allowed fire to escape from the oven and spread to the cabinets. Damages were estimated at $20,000. 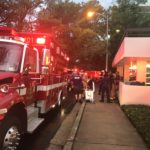 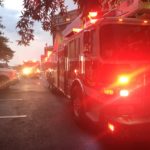